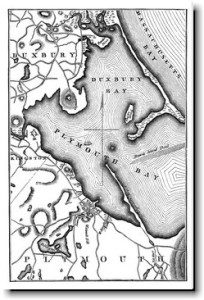 The Plymouth Yacht Club obtained its charter from the state on June 5, 1890, but the club actually existed longer than that. It organized a few seasons earlier (a charter was the 19th century equivalent of today’s incorporation) and a trophy held the Watson family descendants today honors the winner of a race held May 30, 1890.

The Old Colony Memorial, two or three times a summer in the mid-1880s, recorded the results of sailboat races which included many of the boat owners who later became charter members of the yacht club. One of the best regattas, according to the weekly newspaper, was held July 4, 1889. That same year, members obtained clubhouse space among other buildings on Long Wharf, about where the State Pier is today. A structure, 20 20 ft., with a 2nd floor balcony, was built for the new club – one of the first buildings in town to use newfangled electric lights. It blew down in the Portland Storm of 1898 and the club’s headquarters moved across Water Street. Its last location was at the junction of Winslow and Water Streets.

Yachting was a young sport in that era. Although the New York Yacht Club was founded in 1844, yachting didn’t grow as a sport until after the Civil War. Then the nation entered a long period of economic prosperity that gave birth to a middle class with disposable income to use during the newly invented summer vacation.

By the last quarter of the 19th century, yacht clubs were organizing to hold competitions featuring contemporary workboats in glossy, yachty versions: small spritsail-rigged boats and catboats in several sizes. A pewter trophy cup awarded to 23 year-old George Shiverick for taking second place in an 1893 race bears an engraving of a catboat that appears to be about 25 ft. long.

An “Association Race” on August 31, 1899, as recorded in Manning’s Yacht Register–1900, sailed a course outside Plymouth Harbor in light southwest winds with elapsed times of two to two and a-half hours. Class D included 25-ft. cabin catboats; Class L had 21-ft. decked boats and Class Y, 21-ft. cabin catboats. A “Second Special Class” sailed a shorter inside course over a one to one and a-half hour period. Many of the same larger catboats raced in competitions at Quincy Yacht Club “off Houghs Neck” and at the Hull Yacht Club “off Nahant,” according to Manning’s.

The concept of the one-design class was still in the future when the Plymouth Yacht Club was organized, but Shiverick’s Boat Yard in Kingston eventually turned out many of the early class boats raced at Plymouth and at Duxbury; among them, Massachusetts 15s, about 25 ft. LOA but 15 ft. LWL; a class of 17 ft. decked catboats; and later, some of the 18 ft. Duxbury Ducks, a John Alden design.

In 1925, the Pilgrim Yacht Club was organized a group of mainly summer residents (many of whom later became year-round residents). This club was first situated at the end of Howe’s Lane near Jabez Corner — not much water

for the fleet of Baybirds they acquired. After incorporating in 1928, the club in 1929 bought the old Atwood Lumber Company Building and Doten’s Wharf, where today’s Plymouth Yacht Club is located. The Pilgrim Yacht Cluh soon had a fleet of about 25 Duxbury Ducks which they sailed in competition with the fleet of over 60 Ducks in the Duxbury Yacht Club (founded 1894, incorporated 1895).

By the early 1930s, the Plymouth Yacht Club’s membership and activity had dwindled. The clubhouse had become “just a boat club’s place to store their oars,” in the words of one observer. On the other hand, the Pilgrim Yacht Club was thriving. It hired a steward and a sailing instructor and held regular events in season at the clubhouse – dinners, dances, bridge parties, and clambakes on Long Beach. It wasn’t long before someone came up with the idea of seeking a union of the two yacht clubs.

A major reason for this union would be for the “new” yacht club to become old!! The annual yachting registers always listed the yearly race results the age of the club. The New York Yacht Club occupied the top slot as the nation’s #1 yacht club. Plymouth was listed as #125. By the turn of the 20th century, there were hundreds of yacht clubs in the USA. (Today, there are over 1,500 active clubs.)

Since the Pilgrim Yacht Club facilities were far superior to what the nearly moribund Plymouth Yacht Club had, it is unlikely there was much opposition to the union which took place in the winter of 1938-39. The following summer, regattas were held under the “old” three-starred, red burgee and the blue-and-white Pilgrim Yacht Club burgee was retired.

After World War II, the club began to grow again. The Junior Member’s organization was strengthened; the season extended into October; and new classes of sailboats were introduced. A full-time steward was hired in 1970 which enabled keeping the clubhouse open for activities year-round. Eventually the clubhouse was expanded the addition of a large function room in 1977. Acquisition of the Kyle property next door helped with increased parking capabilities, relocation of the Junior Clubhouse, and a needed workshop for the steward.

In 1988, a full-time clubhouse manager was added to the staff of the Plymouth Yacht Club; the steward focused on waterfront activities. The sailing program for youngsters grew through the 1990s, developing winning sailors in competition with other clubs, including the International 420 regatta hosted at PYC in 1999. The interest of many PYC members in larger cruising sailboats has led to a growing Performance Handicap Racing Fleet; skippers of these boats have offered “big boat” experience to sailing students. An evening program of sailing instruction for adults was launched in 1996. Another new program called “First Wave” started in 1995 for youngsters who are not ready for sailing lessons, familiarizing them with the waterfront and safety regulations. The popularity of this program led to the introduction of the “Second Wave” providing two levels of pre-sailing programs.

Please note that this text and information is copyright protected.  Reproduction of any part of this text is prohibited without the expressed written permission of Plymouth Yacht Club.